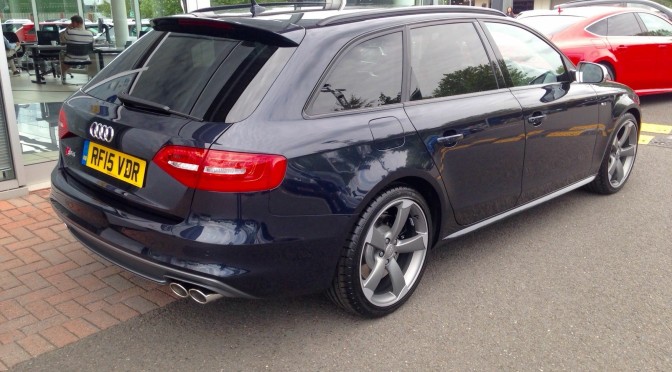 Having covered 6,000 miles since July last year, I now feel I have a better understanding of what this car delivers, both good and bad.

Lets start with the good – the performance for this size of car is immense. On a road trip to France last year, there was nothing keeping up with us. I’ve read reviews of 0-60 in 4.6 seconds with no modifications and this actually seems to be down to the lightening speed gear changes that give a very enjoyable rumble on the up shift. The Avant probably gives a better effect due to echoing in the open boot space.

The B8 S4 also has a Jackal and Hide personality, which suits this car perfectly. In D (if you have the auto), it is such a lazy car somehow getting itself into 7th gear at around 45 mph at what seems like idle. Push the shifter over into manual and use the paddles on the steering wheel then you suddenly feel transported into a touring car! Handling and steering feel are surprisingly good with a decent weight and not too much assistance. If you barrel into a corner, yes the front will push on and you could understeer a bit, however drive this car properly with a slow in fast out approach (much like a 911) and you have one of the fastest all weather A to B cars available.

Onto the bad – in less than a year, I’ve had to take the car back to Audi for squeaking brakes, rattling Sat Nav screen / MMI and bumpers off to resolve a parking sensor problem. Audi gave us a diesel A5 coupe to use while we need 4 doors and a big boot. In comparison, Porsche used to give me a Panamera whatever the situation. Not much of a complaint against Audi really considering BMW once gave me a Micra in exchange for an M3.

Vicki Butler Henderson wrote an article about the BMW M3 CSL being her choice for a family car to cross continents in. Having owned several M3’s (see here) and now knowing how much crap you have to cart around with you for 1 child, the S4 Avant is still the number 1 in this sector.

This message is only visible to admins.

Error: Error validating access token: The session has been invalidated because the user changed their password or Facebook has changed the session for security reasons.
Type: OAuthException

FastGerman.com is in London, United Kingdom.

FastGerman.com is at Goodwood Motor Circuit.

The Breakfast Club at Goodwood hosted Supercar Sunday with a nod to 50 years of the Porsche 911. A few pictures below of the cars that stood out most to me. #porsche911 #997gt3rs #carreragt #v10 #flat6 #mezger #goodwood #supercars @ Goodwood Motor Circuit ...

Love this car, pictured at a #goodwoodbreakfastclub a few years ago and amazed that a little Croatian company #rimac can afford to buy #bugatti #bugattiveyron #bugarti #volkswagenaudigroup ...